GoPro vs iPhone: What Is the Best Camera for Travel & Vlog?

Nowadays, GoPro and iPhone are two great cameras for recording your outdoors adventures. If you are already an iPhone owner and you too are wondering whether you should buy a GoPro as well… this article will show you the difference between these two cameras and, hopefully, by the end of it you’ll have a clear idea whether you need a separate camera like a GoPro for capturing your life.

Without further ado, let’s get started!

First and foremost, let’s have a look at the specifications of both:

You must have noticed that specs-wise both the cameras look amazing and quite similar. But here, we’re comparing a premium phone and a rugged camera for your adventures – the products are quite different that way.

Here’s the feature-wise comparison of iPhone and GoPro. Let’s see how these products perform when you compare the key features of both.

However, the image stabilization on iPhone is only good enough to slow down a slight shake of hand. It isn’t even in the same league as the GoPro, especially when you talk about action videos. The shots taken by the iPhone look much more unsettled, especially with fast movements. In contrast, the GoPro has a set focus even in extremely shaky situations, thanks to its outstanding hypersmooth stabilization. So, if you are planning to shooting action videos, GoPro is definitely better than any iPhone.

GoPro is considerably less bulky and more compact than an iPhone. Being the default ‘outdoor adventure camera’, GoPro has a rugged exterior and simple & focused feature set making it the perfect companion when dirt and mud are calling!

But, you can not say the same about the latest generation, or in fact any iPhone. If you drop the iPhone X or 11 on the floor, its screen will most likely be broken. That’s definitely not the case with a GoPro. So again, for any action, sport and adventure shooting, a GoPro is more ideal than an iPhone.

The latest GoPro models are waterproof in true sense. You don’t need an additional housing to protect them from water, they’re inherently made to be waterproof (up to 33ft or 10 meters). So, you can dive with a GoPro in the sea and capture perfect quality videos and photos.

Theoretically, even the iPhone 11 is waterproof! But, this only applies to Apple’s latest iPhone models and they wither only splash-proof or waterproof just by a couple of meters of depth (IP68 certification).

So, if you are planning on recoding beach videos or underwater videos, a GoPro will be more indicated. An iPhone is good for recording vlogs at the beach or at the pool. But not it’s not so indicated for snorkeling or diving videos.

GoPro and iPhone both have time-lapse video. GoPro offers perfect time-lapse shots while moving, without any noticeable shakes (TimeWrap). But, if you want to take a time-lapse video on your iPhone while moving, the video won’t be as smooth as GoPro’s. If you compare the two, iPhone 11’s hyper lapses (while moving) look much more unsettled, especially with fast movements. Also, the night-lapse mode works like a charm in the GoPro, which is sadly not available on the iPhone.

If you already own an iPhone and use it, most likely you’re already familiar with this process. The iPhone camera is always just a quick swipe away. With GoPro, once you’re familiar with its few buttons – which one turns the device on and which one takes pictures – you can quickly get good photos and videos in any situation. But, be sure to practice a bit beforehand!

Speed wise, the iPhone is clearly the winner here. Its camera can be started in fractions of a second via its lock screen. But, GoPro Hero 7 & 8 take about 3 seconds to start-up.

Also check out: How to Turn ON / OFF GoPro Cameras [Buttons Explained]

It is a known fact that GoPros aren’t the greatest cameras when it comes to low-light or night photography and videography. Although the new generation models have improved a bit in this aspect, it’s still not there! An iPhone, on the other hand, can surprise you with its low-light photography. The presence of a flashlight, combined with a wide aperture that captures more light, works for its advantage.

The latest iPhone models – X and 11’s primary lenses have a wider aperture as compared to Hero 7 & 8. Hence, the iPhone performs better than GoPro in low-light conditions.

All GoPro users know of the large inventory of GoPro mounts available in the market to shoot from different angles. GoPro Hero 7 & 8 Black are no different, with a lot of extensions to choose from. You can attach a GoPro to your car or your bicycle, also on your head or chest for amazing POV shots while hiking. Unfortunately, you can not say the same about the iPhone, where there are less accessories available compared to GoPro’s, such like LEDs, selfie sticks, and few more.

An iPhone doesn’t come with expandable storage. You pretty much have to depend upon the in-built storage of your phone. But, in case of GoPro, the expandable storage via Micro-SD card comes in handy, especially if you’re looking to shoot 4K Footage.

GoPro vs iPhone – For Vlogging

With GoPro’s wide angle lens, the nearly endless number of GoPro accessories and mounts to enhance footage quality and the possibility of underwater filming, GoPros provide a truly amazing vlogging experience. GoPro Mounts and accessories are your best friend as a vlogger because they can help stabilize the camera and ensure that your video looks appealing to the audience. And since GoPros are quite compact, you can use it in public for vlogging without drawing a whole lot of attention to you.

For vlogging, most people look for a camera with a flip screen, because it’s much easier to control your image when you have a flip screen. It makes you aware of how you look or whether you’re on camera or not. Sadly, only the latest GoPro Hero 8 has a flip screen. None of the other GoPro models have it.

Also check out: [Vlog Guide] Are GoPros Good for Vlogging? Let’s Find Out!

However, there is a solution if the GoPro that you own doesn’t have such a provision. You can “fake” a flip screen on HERO 4/5/6/7 with this accessory (it’s a mirror, basically): 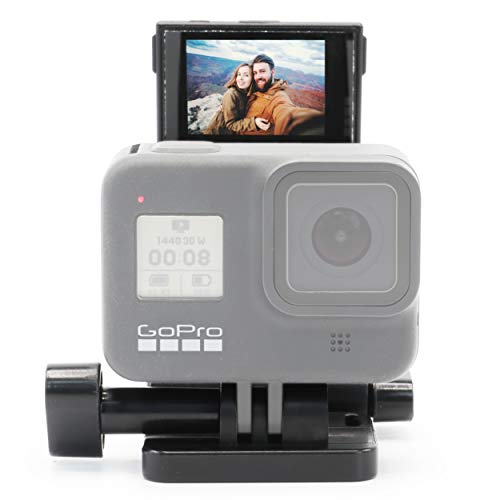 The main benefit of having a smartphone as your camera is that since your phone is always on your hand, you won’t miss any interesting shots because there’s no time for setting the camera. The iPhone 11 is a great choice for vlogging. It offers a wider shot with the ultra wide camera lens that lets you shoot a complete landscape portrait. Therefore, it can be said that iPhone 11 can be used as the best substitute for GoPro for your vlogging and short film.

I personally tend to film any casual vlogs and document my day to day life with my iPhone camera just because it’s always in my pocket wherever I go, more than my GoPros. Have a look at this perfect Vlogging Equipment for your iPhone: 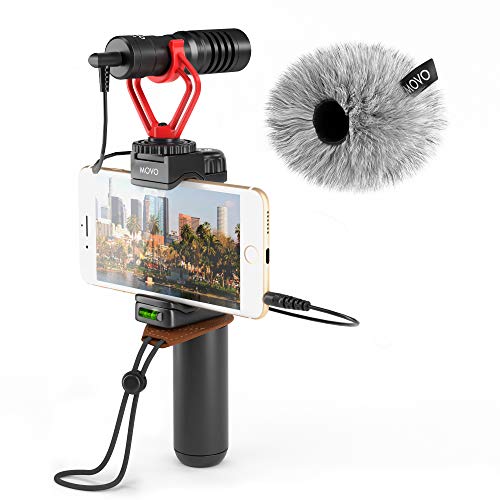 iPhone vs GoPro: The winner is…

Both GoPro & iPhone cameras are capable of shooting at a similar resolution (4k), but they don’t necessarily cater to the same user. So, if you are going to use your camera mostly for still photography and for documenting your day to day life, then all latest iPhones (iPhone X, iPhon 11, etc) is probably more convenient than a GoPro, especially if you already own an iPhone. However, if you need to record sport, action and underwater videos, then GoPro would be a better choice because it’s designed for that.

Personally, I use both my iPhone camera and GoPro for travel and vlogging. GoPro is my primary camera as it is much more durable and rugged. I would recommend GoPro over iPhone for documenting all kinds of adventures – more so, if you don’t have the latest model of iPhone! However, if you don’t have the latest GoPro Hero 8 Black, iPhone 11 is a great choice for selfie photos and vlogs as you can see your face on the screen while recording.

Overall, the GoPro is way more versatile as compared to the iPhone, especially for travelling and action… And it goes underwater too!

Hi! I'm Andrea Magrì - Videographer & Entrepreneur. I write all of the content you'll find on the Project GoPro blog. If you would like to learn more about our advanced stuff, check out the new GoPro LUT's pack.

GoPro Fishing Guide 101: How to Use + Best Accessories