GoPro – the dominant player in action camera space – has come up with a great camera that’s different from all the GoPros that came before it. The Fusión GoPro is one of the most loved true 360 grados cameras out there. Capable of delivering quality 5.2K/30fps footage, this camera comes in a friendly and durable package that strikes a powerful balance of size and wits. 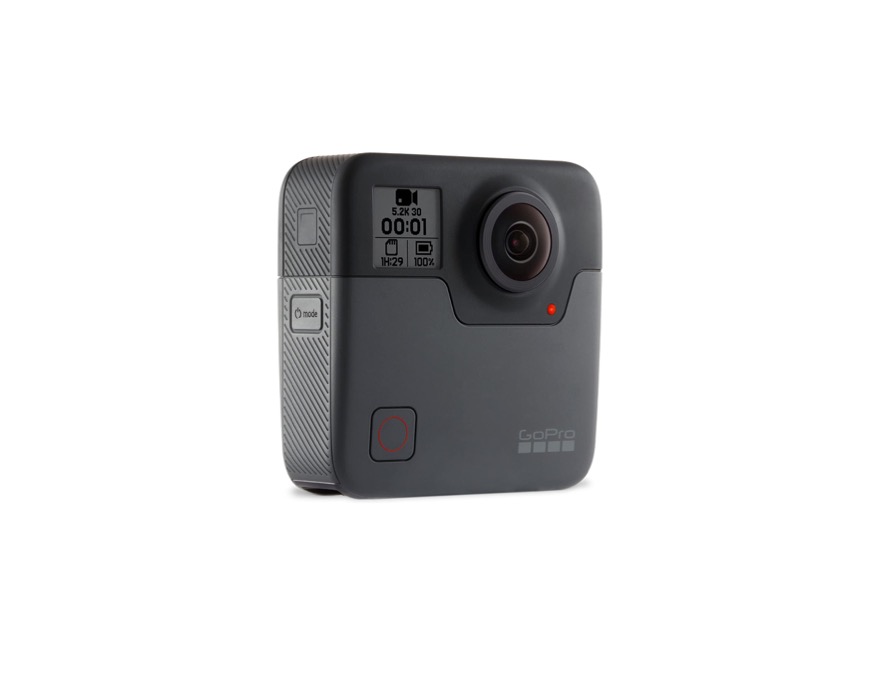 GoPro Fusion lets you capture immersive 5.2K, 360-degree footage and unlock unique perspectives and visual effects that are not possible with the traditional single-lens cameras. Here are the key specs of the Fusion 360 camera:

Top 7 Features of GoPro Fusion That I love

GoPro Fusion is loaded with some great features. Here are the top 7 features of GoPro Fusion That I love:

GoPro Fusion is designed to be resistente and functional even in extreme conditions. It looks quite different from the company’s Hero line of cameras. For starters, it’s bigger & heavier than other GoPro models. The body has a rubberised finish; so it should be able to handle minor falls. It’s also impermeable up to 5m (16 feet). The camera has an 18-megapixel sensor with a fish-eye lens on both front and back to capture 360-degree footage. It ships with a standard GoPro mount pre-installed on the body. GoPro also includes a protective case with a soft inner lining for storage and transport to avoid scratches.

Fusion sets itself apart from many other 360-degree cameras with its resolution. The image quality of this 360 cam is top-notch! You can capture amazing shots at 5.2K resolution. And while 5.2K at 30fps provided by Fusion leads to some amazing-looking shots, you also can hit 60 frames if you downgrade to 3K. However, I would recommend you to stick with the 5.2K setting as it gives you more flexibility in post production with the GoPro software.

OverCapture, as GoPro likes to call it, is another great feature in GoPro Fusion. It’s basically a unique and powerful editing tool that brings life to 360 footage by transforming spherical content captured with your GoPro Fusion into traditional, non-spherical media – all this from within the GoPro app! It lets you reframe an infinite amount of traditional 1080p fixed-perspective videos from a single Fusion clip. This functionality also allows you to re-record, punch-out and even re-capture content from an entirely new perspective.

Estabilización in the GoPro Fusion is excellent! It’s almost on par with a gimbal. Thanks to the sensors inside the camera, it knows exactly what movements it experiences while recording. Fusion features two types of stabilization: Anti-Shake and Full Stabilization. The Anti-Shake mode smooths out the video, but retains the general direction and movements of the camera. Full Stabilization, on the other hand, locks the orientation of the camera and neatly removes all movements.

GoPro Fusion captures shots in three camera modes: Video, Photo, and Time Lapse. While we’ve already discussed how awesome the videos are with Fusion, the still-photos taken by this camera are also pretty amazing. It shoots 18MP photos at 5760 x 2880, and can also shoot in modo ráfaga (up to 30fps). The sharpness is fairly consistent throughout the image.

You can also shoot great time-lapses from your GoPro Fusion cam. There are two ways to do it: Time-lapse Photo and Time-lapse Video modes. The Time-lapse Photo mode shoots still, spherical images at your desired interval (0.5, 1, 2, 5, 10, 30 or 60 secs), and when it’s done, you’ll have dozens to hundreds of images in that sequence. You can then choose, edit and delete frames for your final time-lapse movie. In the Time-lapse video mode, the Fusion automatically creates a movie sequence rather than providing you a batch of images you can edit or delete. The GoPro Fusion also offers a Foto del lapso nocturno mode, which is meant for those wanting to shoot in low light.

#6: Ships with a good starter kit

The GoPro Fusion comes with a nice starter kit in the box. You get two adhesive mounts, a Type-C cable, a pouch for the camera, and a multi-purpose handle called the Fusion Grip, which can also be used as a tripod or selfie stick, and its telescopic arm can extend to give you more flexibility. The build quality and finish of the Fusion Grip are great. It’s quite sturdy.

La GoPro Fusion Studio desktop software has some great features. You can adjust pitch, yaw, and roll for each shot, turn on/off image stabilization, trim clips and render high quality outputs in either 5.2K or 4K. Additionally, the Fusion Studio allows you to choose a flat color space if you want to color grade in software like Adobe Premiere or DaVinci Resolve. You also get the options to adjust temperature, brightness, tint, sharpness, shadows and highlights. And the OverCapture functionality, as discussed above, is the cherry on the cake!

GoPro has also rolled out the first version of its mobile OverCapture experience. It’s included within the Aplicación GoPro for both Android and iOS.

Although Fusion is capable of providing some wonderful shots, there are a few things that could have been better:

Verdict – Should you buy GoPro Fusion?

Overall, GoPro Fusion is a solid 360 degree camera. Video quality is superb as we’ve seen from the specifications above. But, if you are still not sure whether you should go for GoPro 360 Fusion or a standard GoPro (like Hero 7, 8) then I can say that this highly depends from the application.

What are you looking to achieve with your GoPro? Do you really need 360 degrees video capabilities?

The answer to these questions will determine whether you need this model or the other. So, if 360 video is not priority, I would stick with a GoPro Hero 7 or 8 simply because they are cheaper and deliver a better performance if you are looking to film day to day life.

On the other hand, if you have a real reason for shooting 360 videos, then definitely stick with GoPro Fusion or GoPro Max (aka Fusion 2). They are both great 360 cameras.

Here I’ve answered a few questions regarding GoPro Fusion that you might have.

A: Yes, GoPro Fusion can take pictures too. It has three camera modes: Video, Photo, and Time Lapse.

Q.2: How to turn off GoPro Fusion?

A: To power off your Fusion cam, you need to press and hold the Mode button for two seconds. The camera beeps several times while the camera status lights flash.

Nota: Fusion automatically powers off after 7 minutes of inactivity.

Q.3: How does the GoPro Fusion work?

A: Fusion is essentially a pair of 180-degree cameras housed in a single device. The two cameras capture images simultaneously before their outputs are fused together into a spherical format.

Q.4: What is GoPro Fusion Studio?

A: GoPro Fusion Studio is an app by GoPro meant specifically for your Fusion camera. It’s packed with several tools to transform your Fusion content into pro-quality videos, photos and VR stories.

Q.5: How much is the GoPro Fusion?

A: Check current price on Amazon.