El GoPro Héroe 8 is the latest action camera launched by GoPro in October 2019. It is loaded with all the new and upgraded features ready to take you on a roller coaster ride. There is nothing more striking than a solid, stable and reliable action camera model supporting all the latest technology. With Hero 8, you can now shoot the best quality footage on your various adventure trips.

What makes GoPro Hero 8 all the more interesting is its improved especificaciones, a new design that incorporates the mounting system right into the case, excellent estabilización de la imagen and some amazing add-ons like Mod. de medios de comunicación functionality. Read on to know more about this new fashionable, multifunctional gadget…

The very first question which comes to our mind: Is Hero 8 worth all the money? Well! Sí, it is. Although it’s a bit expensive than the previous model Hero 7 Black, but if you are someone who loves photography and crave for the latest features then Hero 8 is the best of the best action cam available today. 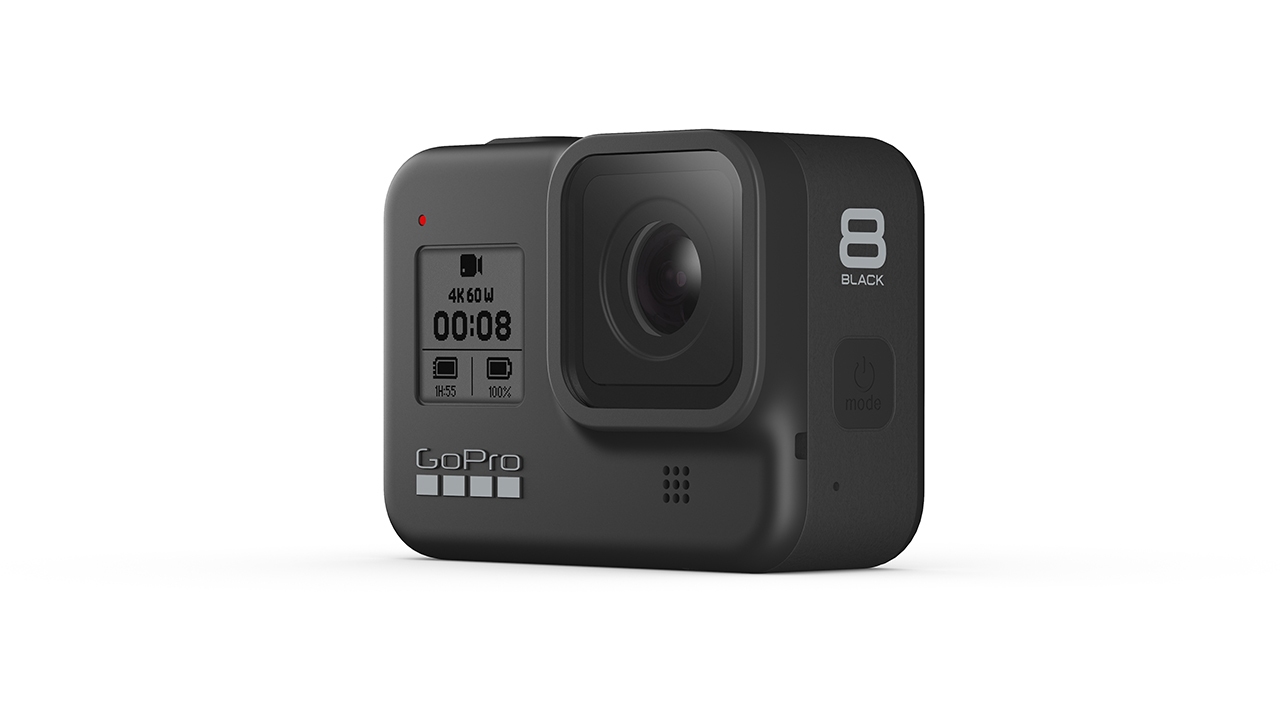 With this camera, GoPro has redesigned the exterior for the first time post Hero 5 Black and now includes an integrated mount. So, you no more have to worry about carrying the additional frame to mount your cam on. It is waterproof up to 10m without additional housing. The new design is slightly thinner, wider and taller than Hero 7 which definitely makes it lighter and pocketable. The exterior frame is made of metal and rubber around the edges and face plate.

Video stabilization has been upgraded and is more effective now with Hero 8. Also, the voice quality for your various endeavours has been improved with an front-facing microphone. The table below highlights all the especificaciones of the GoPro Hero 8 Black.

The Hero 8 is a tough cam with a impermeable design and the video quality remains excellent, with stabilized 4K footage at 60 fps.

The most significant change in this GoPro model is the integrated mounting fingers so you won’t need to attach an extra piece to be able to use the accessories. Also, it means carrying less equipment. However, the fingers do move beyond 90-degrees, which can lead to shaky videos at times.

The exterior is tough with the sensor and secondary display on the front, and a big touchscreen on the back. The lens is now made of Gorilla Glass which makes it twice as tougher than the previous models. The battery door has now been moved from bottom to side, which means convenience of accessing the memory card and battery without having to first remove a frame or detaching the cam from the mount. Click on the link below to find the little yet powerful additions in the designing of Hero 8.

The Hero 8 guarantees ultimate image/video quality with upgraded features like Hipersuave 2.0 which captures smooth, absolutely shake-free videos while in movement. You can stabilize the video even more by enabling the Modo Boost.

Timewarp 2.0 adds a couple of new hacks, it allows you to capture dramatic scenes by one calculating the time-lapse speed based on the amount of camera motion. Two, you can slow down to real time with the tap of an on-screen button, and then speed back up into hyperlapse with a second tap. Also, Night-lapse videos can be created in camera; and raw photos can be captured for single shots, live-bursts and time lapses.

GoPro Hero 8 provides flexibility to capture footage in 4K resolution at 60fps, 30fps and 24fps according to the users’ creative need. The video quality has also considerably improved as GoPro has upped the bitrate of 4K footage from 78 mbps to 100 mbps in both 4K and 2.7K for the Hero8 Black. For slower slow-motion, you can drop to 2.7K and shoot at up to 120fps, and you can drop down to 1080p and push the frame rate to 240fps.

Despite all the latest additions, there are a few minor drawbacks in GoPro Hero 8…

Aunque ahora la lente de la cámara está hecha de un material mucho más resistente (como se ha descrito anteriormente), el hecho de que no puede ser eliminado o reemplazado unlike the previous models is a sure con. According to GoPro, it is cheaper for them to replace the camera instead of repairing it. They do provide a provision of exchanging the camera in their year plans, but that’s a bit expensive. Also, a separate frame will be required if you want to use filters.

All GoPro users are well aware that GoPro battery life remains to be a problem till date. On an average, GoPro cams have a battery life of 1.5-2 hours. You can extend the life by a few tricks like reducing the camera resolution or disabling the unwanted features like WiFi, GPS etc. Nevertheless, it is always advisable to carry a few extra batteries along.

There are several voice commands available in GoPro 8 as well like “GoPro start recording”, “GoPro stop recording” etc. When working properly, they sure are a plus and save time and battery life. But, voice commands are not always reliable. They may or may not work at all times which does prove to be a flaw while shooting.

This sleek, fashionable, powerful gear is a must buy for you if you want to experience the latest trends of filming and shooting. The GoPro Héroe 8 with incredible voice and image stabilization and upgraded features is a treat for all photo and video lovers.

However, if you are looking for a less expensive option, you may check out GoPro Hero 7 Negra.