Not sure if you should go for a GoPro Hero 8 or an Akaso v50 Pro? Then you’re definitely at the right place! In this article, you’ll get a detailed comparison of both these flagship cameras of their respective brands.

Although we’ve done a detailed analysis and come up with this post, there are certain things that you need to figure out first in order to make a right buying decision. You must have clarity in your mind regarding the purpose for which you need an action camera – whether you are a casual or a professional user. And most importantly – your budget.

While there’s no denying that GoPro is the leader in the action camera market, Akaso too has lately come up with an exciting range of cameras that are not just great but affordable too. But, is the GoPro-like action camera by Akaso: the v50 Pro really worth buying? Read on to get the answer…

First things first: Let’s have a full review of both Akaso v50 Pro and GoPro Hero 8. Here you’ll get detailed information regarding the features and specs of these cameras. 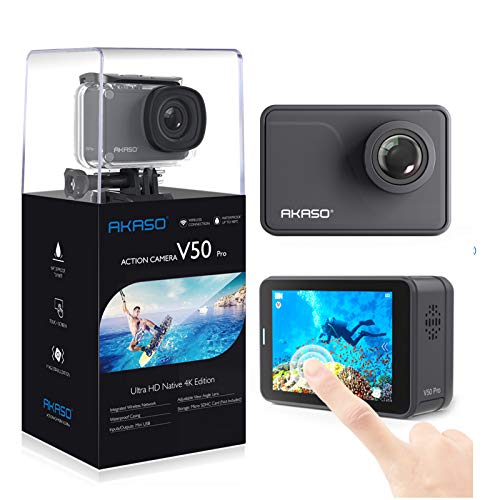 What we like: In the first glance, the design of Akaso v50 Pro looks appealing with its rubberised grey exterior and a waterproof housing. The specs of this camera are also pretty impressive for its price range. It has the ability to shoot 4K footage at 30fps, 1080p at 60fps & 30fps, and 720p at 120fps & 60fps. V50 Pro also has a built-in electronic image stabilisation (EIS), an adjustable field of view – Super Wide, Wide, Medium and Narrow, a large 2-inch touch screen and can shoot stills at up to 20MP. The external waterproof housing protects the camera down to 98 feet underwater. There’s also a built-in Wi-Fi to let you connect to the partner app for iOS or Android. Another plus: you get a box full of accessories for mounting your camera and more…

What we don’t like: The touch screen is not very responsive and lags a bit. Also, if you drop the resolution to 1080p, you’ll know that the footage lacks the detail that you’d expect. And in low light conditions, this lack of tonal definition becomes all the more apparent! So, if you’re shooting anything other than 4K, you’ll be highly disappointed with the video quality.

What we like: GoPro Hero 8 features some great design changes as compared to the previous models. Its exterior is tough with the sensor and secondary display on the front, and a big touchscreen on the back. The lens is made of Gorilla Glass, which makes it twice as tough as the previous GoPro models. The Hero 8 provides an improved video quality with a 12-megapixel sensor that can record 4K footage at 60, 50, 30, 25 and 24fps. Slow-motion fans will appreciate its 2.7K at 120 and 100fps capability. The camera guarantees ultimate image/video quality with upgraded features like Hypersmooth 2.0 which captures smooth and shake-free videos while in movement. You can stabilize the video even more by enabling the Boost mode.

What we don’t like: Although now the camera lens is made of a much stronger material (as described above), the fact that it cannot be removed or replaced unlike the previous models is a sure con. The battery life too remains to be a problem, as with other GoPro models. You get only about 1.5-2 hours playtime.

Now that you have a fair idea of the major pros and cons of both Akaso v50 Pro and GoPro Hero 8 Black, let’s have a feature-wise comparison of both and see which one wins.

The image quality in Akaso v50 is definitely NOT as sharp as the latest GoPro. However, it isn’t too bad either. We can say that it’s quite like what you used to get in a GoPro a couple of generations back. So, while the image quality of Akaso v50 isn’t all that amazing, for the price that it comes – it’s acceptable!

While both cameras support 4k resolution, if you’re looking to shoot a slomo, the resolution in Akaso drops down to 1080p, while your GoPro can still do it in 4K.

Both these cameras are not that great when it comes to audio quality. You have to depend upon an external mic to get optimum audio quality for things such as vlogging etc. That said, the audio quality of Hero 8 is still way better than that of the Akaso v50!

Build quality of Akaso v50 is not that impressive, especially it’s screen which is prone to get scratchy. GoPro Hero 8, on the other hand, is the latest, solid, rugged and a highly improved GoPro with top-notch quality of everything, right from its exterior to its lenses.

The touchscreen of Akaso v50 is decent enough, but it isn’t as responsive as the GoPro Hero 8. Upon usage, we noticed that it lags a bit (which is not the case with the GoPro).

With the advanced EIS technology HyperSmooth 2.0, the awesome image stabilization performance that GoPro Hero 8 provides is way better than that of the Akaso v50. We used both side-by-side, and the difference was clearly noticeable. GoPro Hero 8 is a clear winner! That said, if you don’t intend to use your action camera in extremely shaky situations, then Akaso’s image stabilization is not that bad either.

GoPro Hero 8 has one of the widest angles there are in any action cam so far, especially when you use the SuperView mode, which provides exceptionally wide angle footage! The angle of view in Akaso v50, on the other hand, is decent but not quite as wide as the GoPro Hero 8.

The Akaso v50 has a cool time-lapse feature which works pretty well! But, again it’s not as great as the TimeWarp in Hero 8.

Don’t even think of getting your Akaso v50 close to water without putting it inside the underwater housing! This is something that hasn’t been really needed with GoPro since the Hero 5 Black (unless, of course, you’re going more than a few feet underwater!)

Akaso is lighter and more compact than GoPro. Have a look at the image below. 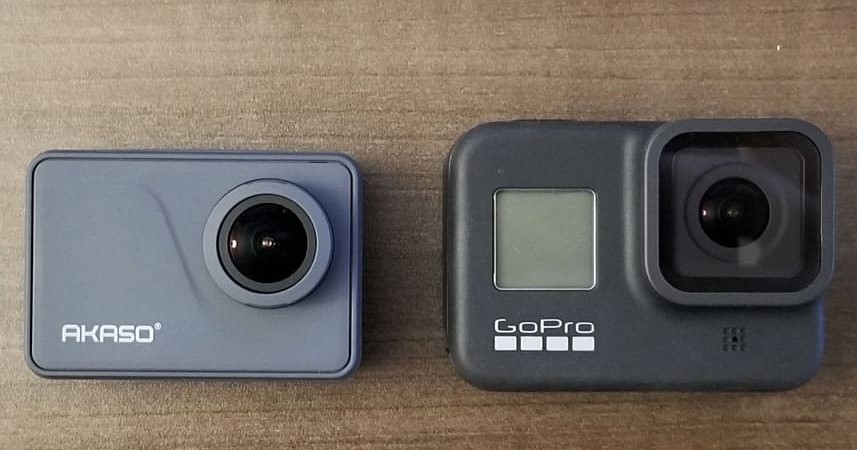 At just $119, Akaso costs almost a third of what GoPro Hero 8 Black does (which comes at almost $350 presently). Here Akaso is the more affordable one, but you have to compromise on several fronts to get an action camera at this price point.

Since the Akaso v50 Pro is much more affordable, it can appeal to the casual user. If you’re someone who is just getting into action cameras and you don’t intend to use one professionally, then Akaso is the better option for you. This is because you don’t have to spend $300+ on an action camera if you are going to use it only a couple of times. But keep in mind that it’s suitable only if your demands aren’t too high or you just need something cheap and cheerful that does the basic job. This Akaso camera allows you to have a much better idea of the features you actually want out of your action camera. And if you feel like upgrading to a GoPro after a year or two years, you’ll be well-versed with how an action camera works.

On the other hand, if you’re a professional, or someone who needs something more serious, you’d definitely be better off getting the GoPro Hero 8 Black – at least if your choice comes down to these two cameras.