What do all of these scenes have in common?

They all look way better when they’re shown in slow motion. It’s a great filming technique that can reinforce your GoPro stories or highlight important actions and details in your film.

Let’s go and dive in to GoPro Slow Motion…

Slow Motion is available on these GoPro models:

What is Slow Motion?

Slow motion refers to an effect where the footage appears to be moving slower than normal.

In order to achieve a slow motion effect, a camera has to be capable of shooting frames at a faster rate than they will be played back at. In other words, the camera takes a lot of still frames (60, 120, 240) per second, which appear slow, smooth and more stable when played at a normal speed.

Let me give you an example to better understand the concept. Imagine we have two different GoPro Settings:

Since the human eye perceives a fluid motion at about 20fps, the film industry has adopted a playback standard of 24, 25, or 30 frames per second. Therefore, if you shoot at a higher frame rate, like 60fps (Setting 1), then you can slow down the footage by 2x because you only need 30fps in one second. By doing so, 60 frames will be spread out in 2 seconds instead of 1, making your video appear slower than usual.

Why You Need Slow-Motion Videos

Slow motion looks awesome, but what do we use slow motion for? Here are a few examples:

The frame shown below was taken from the official GoPro Hero 6 video seen on YouTube. In this slow motion shot, we can observe the expressions on the surfer’s face along with a wall of water moving 8 times slower than normal. As a result, the viewer can process the action in a clear manner and understand exactly what’s happening on-screen.

For a very fast action like surfing, I suggest a frame rate of 120fps to 240fps. 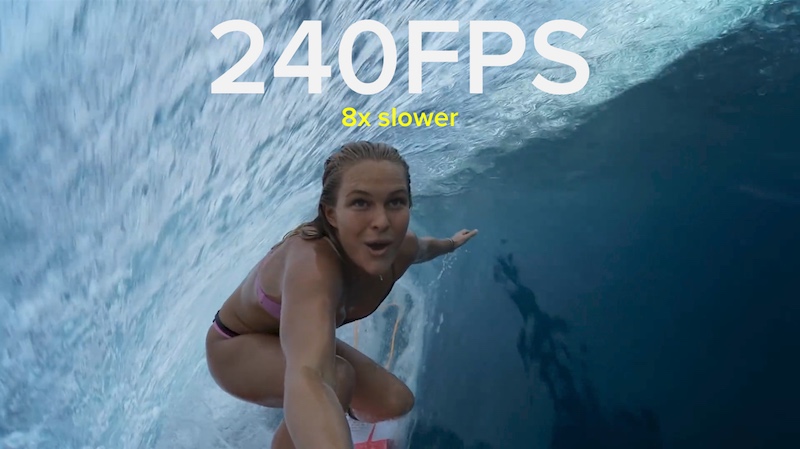 We can use slow motion effects to bring more attention to a specific action or detail. In the example below, the jumping kangaroo was shot at a high frame rate and the video was played back in slow motion, showing a smooth jump. It helps the user see all the details and the jump appears sleek on-screen.

For a shot like a kangaroo jump, I suggest a frame rate of 60fps to 120fps. 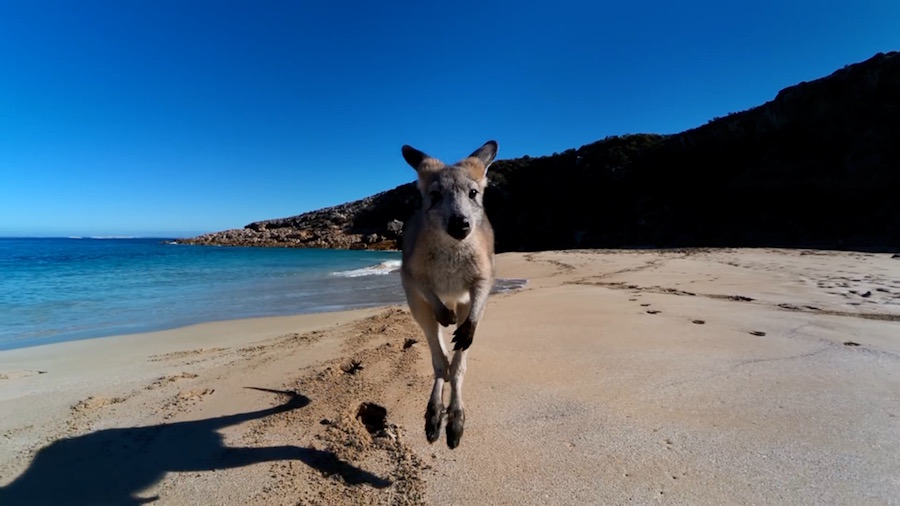 Update: If you’re interested in learning more about the specifics of how to create compelling slow motion videos with your GoPro, check out the filmmaking chapter of the our new book » The GoPro Handbook: A Professionals Guide to Filmmaking

#3: To Get That Cinematic Feel

Slow motion effects are dramatic, hence they naturally give a cinematic feel due to the fluidity of the shot. By analyzing the video seen at the beginning of this article, you will realize that most of the clips are in slow motion and very stable. The part of the video where the girl can be seen running in the middle of the frame is a perfect example of a cinematic feel. A cinematic feel can be obtained with a GoPro if you stabilize the shot (with a gimbal, for example) and increase your frame rate.

For a fast action like running, I suggest a frame rate of 120fps. 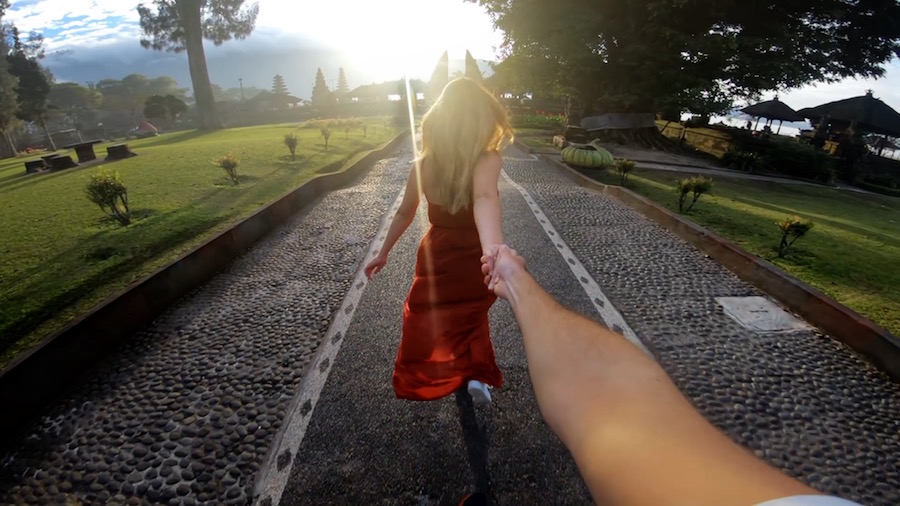 At 1080p resolution, all the latest GoPros – including GoPro Hero 5, Hero 6, Hero 7, Hero 8, Hero 9 & Hero 10 can shoot at 240fps. With such a high resolution and frame rate you can clearly show fast action and its details. In fact, this function is largely used for sports. 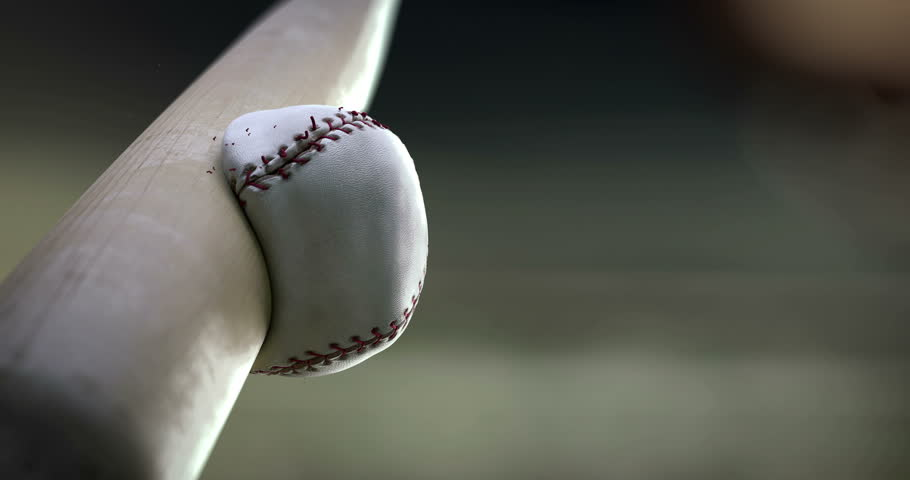 You can use simple maths when attempting slow motion shots. If you decide that your final video will be rendered at 30fps and the original footage was filmed at 120 frames per second, then the resulting video will be 4 times slower than real time. 120 fps (filmed) / 30 fps (rendered) = 4 times slower.

After understanding these simple basics, I would simply evaluate the situation by asking these 5 questions:

I’d look at everything and then answer:

After this evaluation, I would choose 240fps for this occasion. Why 240fps?

To change frame rates on your GoPro navigate to the Home Page screen and then select FPS. 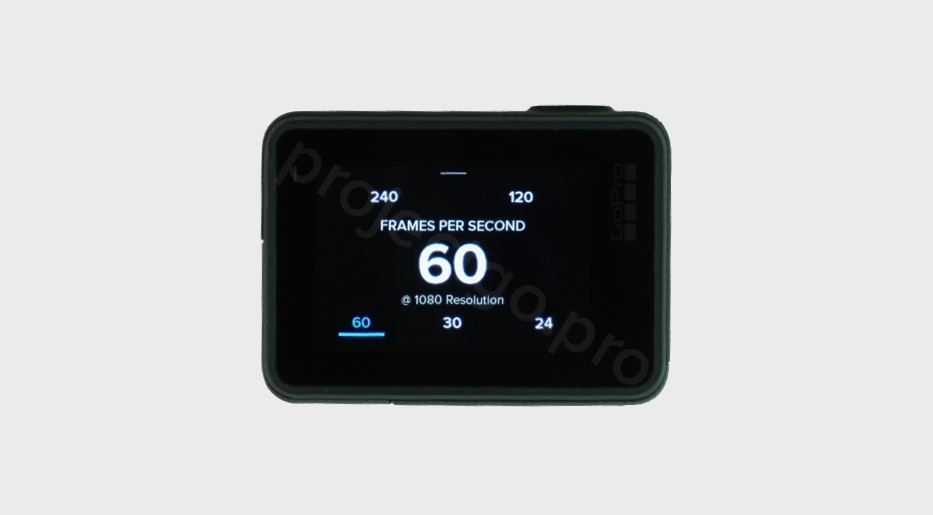 Tips for Shooting in Slow-Motion

This is the part that I like most: shooting.

Ever since I adopted these simple rules, the quality of my slow motion videos has improved drastically. 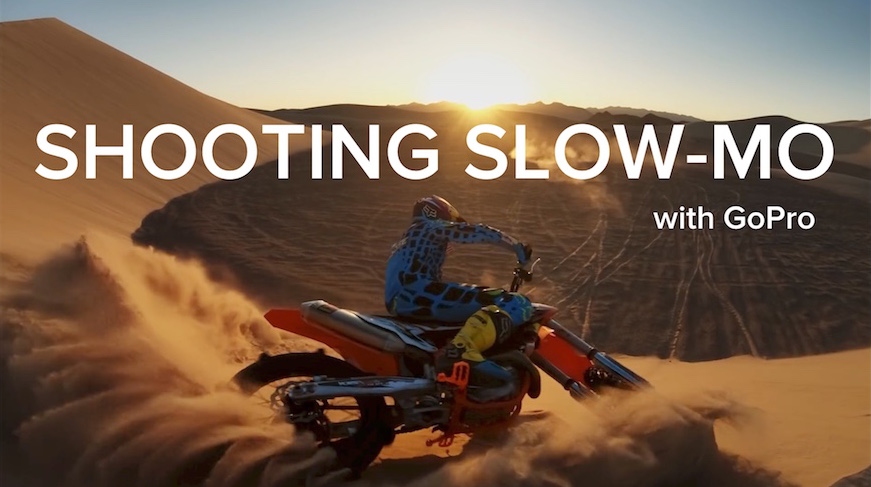 Here there are a few tips for you guys:

#1: Plan Your Shots in Advance

When you have the time and ability, DO PLAN SHOTS. I like to imagine the scene in my head first. Then, depending on the complexity of the shot, I may write it all down on a piece of paper or create a storyboard. 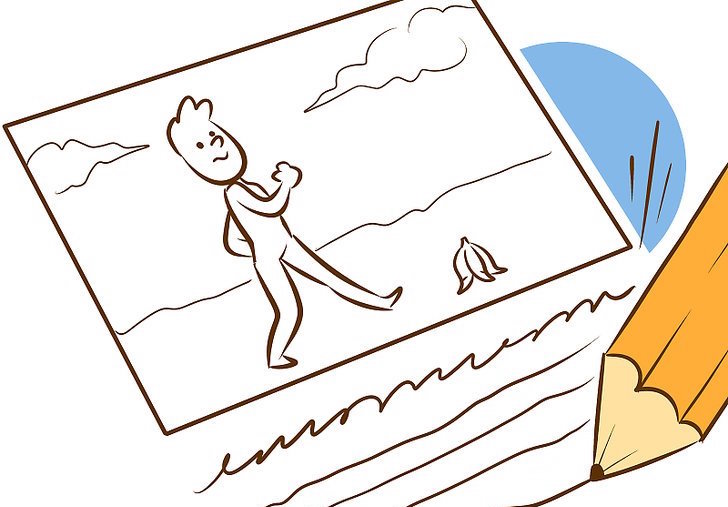 By investing time on creating a scene, you will spend less time in shooting and editing.

This may apply on every occasion, not only with slow motion.

In order to get those smooth slow-mo shots, the footage must look stable. So, activate the built-in digital GoPro stabilization when you can. At low light avoid digital stabilization and instead, use a gimbal or any camera stabilizing support (even a simple GoPro stick can do). 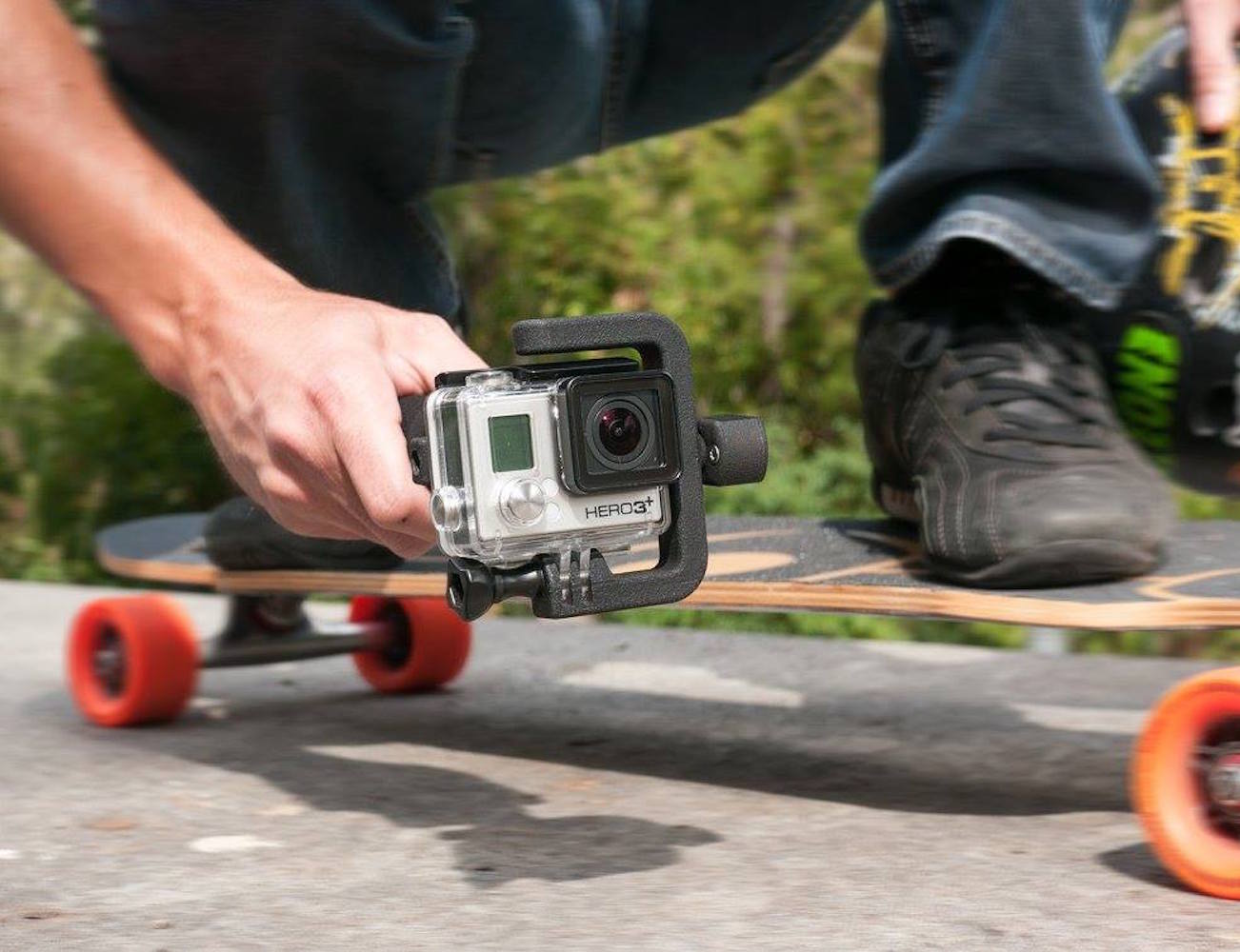 Another tip to make more stable footage is to simply make fluid body movements while shooting. Hold the camera with two hands and bend your knees.

Update: If you’re interested in learning more about the specifics of how to create compelling slow motion videos with your GoPro, check out the filmmaking chapter of the our new book » The GoPro Handbook: A Professionals Guide to Filmmaking

Shooting slow motion videos in low light would most likely result in a noisy footage. This is due to the higher shutter speed set by your camera. 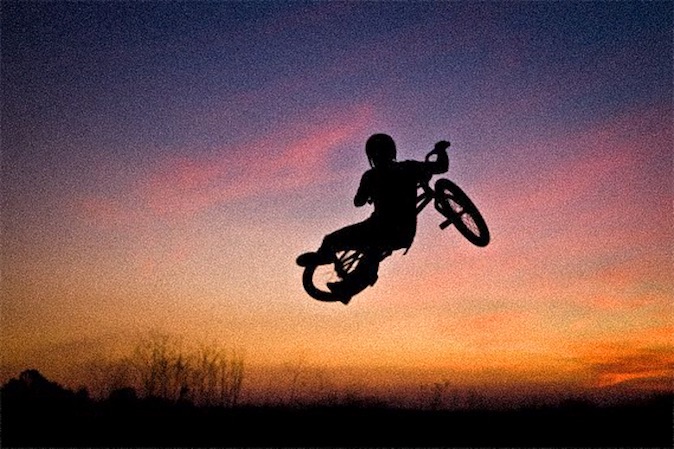 Remember, when you increase FPS, your shutter speed will become faster, making your image look darker. The GoPro would then try to balance the low light by increasing your ISO that will most likely result in video noise, as seen in the photo above.

How to Edit Slow-Motion Videos

In this article I talk about editing slow motion videos – though you can also check out GoPro Editing: Step by Step Beginner Guide + Best Free Editing Software

It’s quite easy to edit slow motion videos. This is an important stage because it’s editing where the slow-playback comes into the picture.

A high frame rate video will appear normal until you edit it. When you begin a new video editing project, you will have to select a timeline speed.

The timeline is basically your clip laid out at the bottom of your editing software. If you stretch the timeline, your video will become longer and therefore it will be played back at a slower rate, giving you a slow-motion effect.

Remember the simple calculation to understand how slow you can go based on your fps? If you don’t, spend a few minutes learning about it in the settings section above.

Most editing software will let you decide the project frame rate as you start a new editing project. This is the frame rate that your video will be exported at. It’s usually 24, 25 or 30 fps. If your clip is shot at 60fps, then it can be slowed down by 50%, becoming 30 frames per second, and still look fluid. So, depending on your editing software, you should be able to change the speed of your clip pretty easily.

Editing on Mobile (with Quik App)

If you are are in a hurry or too lazy to do a proper edit, then use the free Quik App by GoPro:

Step 1: Launch the quick app and create a new edit (or open an existing one).

Step 2: From the preview screen click on the “clips button” at the bottom of the screen.

Step 4: A larger preview of the clip will appear. Now click on the scissor icon that is labeled trim (at bottom). Then continue to next step.

Step 5: On the next screen, set the toggle labeled “Slow Motion” to on. When done click to OK button. Now

Step 6: Now you should be able to preview the slow motion clip. Save, export and share!

In this article, we learned that in an ideal scenario, all of your slow motion shots should be planned in advance and shot with a high frame rate setting.

But, what if you forgot to switch your FPS during the shoot or you just realized that your shot would look cooler in slow motion?

Too late? Not really.

There are various software out there that allow you to “fake” slow motion by adding missing frames between the original frames. This is called Time Remapping. The software would analyze every single frame and re-create “fake” frames to fill in the gaps. So, from a 30fps clip, you could get 60fps, 120fps, 240fps, etc.

The Xs represent the recreated frames. This footage was originally shot at 30fps and we wanted to slow it down by 50%. So we made it 60fps (half the speed) in post-production:

Of course, the result is not of the same quality as seen in a video recorded for the purpose of slow motion but it will still do a discrete job. The difference in quality is because the recreated frames are not real and therefore not always accurate. This really depends on the characteristics of the shot.

How You Can Achieve “fake” Slow Motion

In order to get good results out of this, you should follow these 3 tips:

What software can be used for time remapping?

There are a few. If you want to go professional I would suggest you Twixtor. It’s a paid application. Otherwise, this can be done for free with most editing software (I assume you already have one) like Final Cut Pro X, DaVinci Resolve, Adobe Premiere, etc.

How? In Final Cut Pro X: just slow down the speed of your clip and apply “Optical Flow”.

In other editing software: this function could be called differently, like time-remapping, time-stretching, timewarp, etc. But it’s essentially the same thing.

Pro Tip: The more you stretch or slow down your clip, the more fake frames the software needs to create. So, do not go crazy if you want to get good results out of it.

Creating some amazing Slow Motion shots is a breeze using most GoPro models. With the ability to shoot super-slow-motion footage with speeds reduced by 8x (at 1080p), all the recent GoPro models offer top-notch clarity for your slow-mo footage. The exception here is the GoPro HERO 3, which is limited to 60fps, which means you can only reduce the speeds by 2x in this model.

Therefore, if you own a HERO 3 or earlier model, consider upgrading to one of the latest models, preferable the latest GoPro HERO 10 to get the best slow motion shots of your adventures.

I hope this guide helped you learn all about how to create some amazing Slow-Mo videos using your GoPro action camera. 🙂